As many of you N scalers know, Atlas has had some significant problems with their Chinese suppliers when it comes to their track products.  Some of their Code 55 stuff has been out of stock for over a year.  Dates I’ve seen posted for when stuff is “supposed to arrive” come and go.  The C55 flex was supposed to be here in August, but yet it’s late September and nobody has any in stock.  I’m becoming more concerned by the day that I’m going to be benchwork complete by the end of the year and Atlas still won’t have their act together.

Micro Engineering makes a fine product right here in the USA.  ME unweathered flex comes out to about $0.1322/inch, whereas Atlas works out to $0.1000/inch when bought through the likes of MB Klein in 100 piece lots.  I don’t mind the price difference, honestly – that’s not what holds me back.  I like the free-flexing nature of Atlas C55 better.  I find that it makes for much more even curves without kinks. I like the longer Atlas turnouts – particularly the No 10s.  And, at the end of the day, I want my ties to all match in terms of spacing and texturing.  I don’t want a mix-and-match of track vendors from a visual point of view.

I’m mostly just ranting.  I have a lot of woodworking to do before I’m ready for more track than I already harvested off the old layout.  But if we get into December and there’s still no Atlas track, I’m going to have to start strongly considering a wholesale switch of vendors or even going to handlaid.

‘Tis September, and that means it’s travel and photo charter season in my world.  So layout progress has been slow.

On Sunday, I tore down the old helix, stripped away the ever-precious Atlas Code 55 flex track, and then cut the remainder up into little chunks that went to the trash.  I also hung the first two open grid frames, and they look good.  Very solid, very straight, and awesome to put roadbed and track on.  I think I’ll still add a couple L-brackets underneath just to give them some strength.

I also found a piece of plywood as I was cleaning that was perfect for an extension around my workbench.  I’d always planned to have a branch coming off the top deck (from the reversing loop at Nicolai Junction) around the bench so that I could test engines/cars/electronics without actually going out to the layout.  Plus it will make a decent staging track for trains coming on/off the branch.  So, that was cut out and installed last night, and I’ll add track to it in the next couple of days.  Last night I just laid two pieces of cork and a salvaged piece of flex on it, so that I could hook up the command station for the first time in years and actually see something move.  Actually seeing the SD60M that will become CRNW 600 move a few feet was a very rewarding and motivating experience!

No pictures this time, but maybe later in the week as I get more things cleaned up and put into place.

Given that yesterday was Labor Day here in the US, I spent the day labouring on building benchwork.  The result was ripping three sheets of maple furniture plywood down into 0.75″x3.25″ and 0.75″x4″ dimensional members, and cutting three pieces of drywall that will separate the workshop from the layout area.

Why maple?  The short version is that all of the fir plywood we could find at the usual home improvement stores yesterday was severely warped.  Not just in one dimension, but twisted in both dimensions.  AC-grade fir was $44/sheet, and all twisty.  Good maple plywood was $50/sheet, and flat as could be.  For 6 bucks a sheet, I decided to go with flat.  The side benefit being that I’m going to have some rockin’ awesome looking benchwork that nobody will ever see once I get the layout up.

The first construction to go up will be the section under Cordova and McCarthy, then the peninsulas out to Kennicott and the Cordova wharf, and then we’ll start building along the back (east) wall.  Once I can put the start of the Cordova yard back in place, I’ll be able to clean out the rest of the room and make space to actually construct the rest of the framing.  Until then, all of the construction is being done in the garage by kicking the cars out for a few hours.

Here’s the first piece of open grid support, which will go under Cordova. 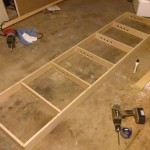