As I mentioned before, late September and early October are usually charter season here in Colorado, and consequently I spend more time out on the narrow gauge than in my basement.  So a few teasers as to what I’ve been up to, from this year’s Chama Steam trip…  (The full trip report should appear within a few weeks on my DRGW.Net website.) 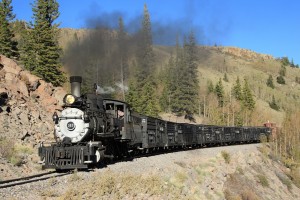 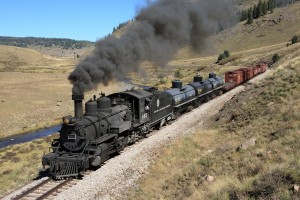 Okay, now that we’ve got our narrow gauge steam fix, let’s get down to what has happened on the Copper River in the past few weeks.  I’ve continued to build benchwork, becoming increasingly efficient at building and hanging open grid frames built out of dimensional plywood.  I’ve got the upper and lower track decks for Cordova (yard and harbor), Kennicott, Nicolai Junction, and McCarthy finished and hung on the wall.  Plus, I’ve migrated the old yard piece onto the new benchwork at Cordova, and placed the rest of the plywood sheet down for the other half of the yard.

I also built a new set of shelves in my workshop area (on the backside of the wall from the Cordova dock or Kennicott), and on one of those is the Cordova reverse loop.  It’s really the first real track laid explicitly for my CRNW.  I’m not counting the old recycled Fort Nelson yard, since it’s, well, recycled.

In addition, I decided to hang some decent fluorescent light fixtures.  Even though they won’t be used for operating sessions and the like (that’ll be handled by the under-benchwork LED strip lights), they make working a joy.  The basement really feels like less of a dingy hole when it has adequate light.  The fixtures are just 2-bulb T8 Lithonia SB232120GESB fixtures from Home Depot.  They’re actually pretty nice – for $32, you get a decent fixture with a high power factor electronic ballast (important to me, given that I’m going to be loading my poor 15A lighting circuits right up to limit eventually) and a tough wraparound diffuser.  I looked at fixtures from all the home improvement stores and a bunch online, and I’m very happy I settled on these.   Bulbs – for now – are just whatever I had lying around.