I started off this layout thinking I’d step into the 21st century and embrace CAD tools for track layout.  I’ve often been described by my friends as “CAD-tarded”, because of my long-standing and complete inability to use CAD tools.  I don’t know why, but the tools and I spend more time fighting each other than getting work done.  I guess my brain isn’t wired that way.  But, I figured with a fresh new project, this was the time to start trying again to switch from my old ways.

I grabbed demo versions of many of the popular packages (CADrail, 3rd PlanIt, etc.), or full versions, in the case of the free XTrkCad, and wound up beating my head against them for a full day before giving up.  I just couldn’t get things to work, and the frustration was driving my creativity level to a new low. Well, there’s a Saturday I’ll never get back.

So on Sunday, I pulled out my 17×22 quadrille pad, templates, compasses, rulers, and drafting pencil.  I was so much happier.  The creativity returned.  I spent the entire Sunday drawing, and didn’t even realize that I’d been at it for 14 hours until I looked up at the clock at 2am.  Oops.

Here’s my initial sketches of a track plan, as captured by my little camera because I haven’t yet scanned them (they’re 17″x22″, a bit bigger than my scanner bed, so it’s going to take some work).  Thoughts, comments? 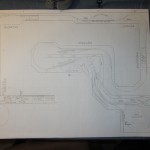 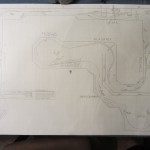 After ten years of making absolutely no progress on my model railroad and switching potential prototypes every year or two, I’ve come full circle to what I had originally planned to model – the long-abandoned Copper River & Northwestern Railway of southeastern Alaska.

The real CR&NW was a copper hauler from the mines at Kennicott, AK, to tidewater at Cordova.  Completed in 1911, the line only lasted a mere 27 years before the Depression and the depletion of high grade ore took its toll.  For its time, it was a spectacular feat of engineering, crossing waters between active glaciers, spanning deep ravines, and dealing with the extremes of climate for which inner Alaska is reknown.

I’m not much of a model steam guy, so mine will be a proto-freelance version where the ore body remained viable and mining continued to present day.   I’m currently targeting a modeling era of September 2012, though that may slide forward or back a few years.  The line will stick closely to the actual prototype, following the route from Cordova up through Miles Glacier, the Copper River canyons, Chitina, and over to Kennicott.   That said, there will be a few concessions to “because I want to”, such as a possible completed Katalla Branch.

The N scale layout will fit in a 16×22 space in my basement, filling two full decks and a possible partial third.  As of the end of July 2013, I have a track plan semi-finalized, and I’ve started clearing out space and tearing down the old layout.  I’ll post progress, or non-progress, as it gets made.

My current timeline calls for benchwork to be complete by January 1, and hopefully track to be complete by mid-Februrary.  Electrical should follow along closely behind, hopefully by the end of March. Then I plan to run for a few months, hammering out any gremlins in the trackwork and getting it down to bulletproof.

After that, I plan to step out into undiscovered territory, at least for me – scenery.  My layouts always hang up in control systems, because, well, I’m an electronics kind of guy.  But I swear, I can change.  If I have to.  I guess.  (With my apologies to Red Green…)