The boxes in the back are mock-ups for some parts of the smelter complex.  This is the area that flooded in July 2016, so I haven’t gotten around to putting everything back and working out the yard layout again.  I have a few pictures on my phone of the original arrangement, so I can probably figure it out again.  Oh well, a project for New Years Day, possibly.

Here’s the first train, sitting just short of the South Eyak control point. Yes, I’m running a BNSF GP60 and some Superliners.  Totally not equipment I’ll ever get to run on the CR&NW, but stuff I have because I like the prototypes. 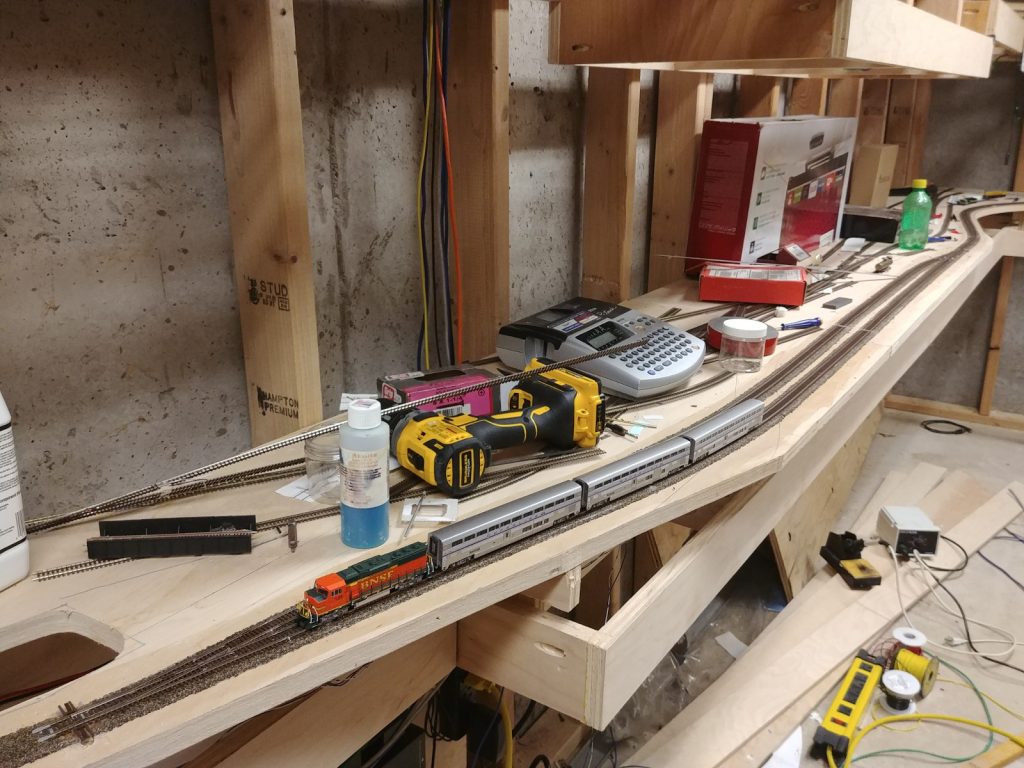 At long last, I’ve finally had some time to get back to the layout.  Over the last 16 months, work has kept me on the road almost continuously.  Also, since I last posted, I’ve had other various calamities taking my time – most notably as far as the railroad’s concerned, baseball and softball-sized hail destroying two of my cars and the entire south side of my house (July 28th, 2016).  Unfortunately one of the broken windows was into the basement, allowing torrential rain and some truly epic hail through, damaging some of the benchwork and generally flooding the basement.   I was supposed to leave to Memphis the next day, so I pretty much vacuumed up the water, dried off the benchwork, replaced the window glass, set up some fans, and shut the door.

And that was  it.  That was the last time the layout was even powered up until about a month ago.  However, winter’s nearly here, work is settling down a tiny bit (though again, I’m writing this on a flight back from Amsterdam), and I didn’t really want to do anything I *should* have been doing.  Plus, the other half of Iowa Scaled Engineering – Michael Petersen – needed somewhere he could test our new Proto-Throttle that had a full-on NCE Power Pro system.  So, I dusted off a few things, cleaned the track, and brought my happy tiny universe back to life.

The good news is that mainline rails have now been extended from Alaganik through the airport (Merle K. “Mudhole” Smith Airport – aka CDV – which was built by the Army Air Corps in WWII on the former right of way) up to the south siding switch of Eyak, where the siding comes back in before the Eyak River bridge.

As far as I know, there was no actual siding at Eyak.  Quite frankly, it was too close to the north/east end of the Cordova yard to justify a siding on a railroad with so little traffic.  However, in my modern day version, it’s a place to stash inbound trains while the yard is busy, or give the Eyak smelter switcher somewhere to get out of the way while mainline traffic passes.

Now the downside…  I had the entire smelter complex laid out with boxes sized for the structures and paper track templates.  It, unfortunately, was right below the broken window and had an actual torrent of water flowing over the plywood.  So all of that planning?  On the floor in a jumbled order.  I now need to go back and figure out what I’d planned, as it was significantly different than what’s on the initial paper track plan from three years ago.

In the spirit of construction, I’ll leave you with this image of the CRNW under construction.  This is at milepost 143, or about 3 miles west of Strelna.  For a railroad that built such immense and durable features as the Miles Glacier or Kuskulana bridges, it’s really fascinating how lightly graded and constructed the initial construction of the track really was – particularly on the Chitina-Kennecott section.  Other construction photos down towards Cordova show a gravel base under the tracks, whereas this seems to be “scrape some dirt and throw down some ties”. 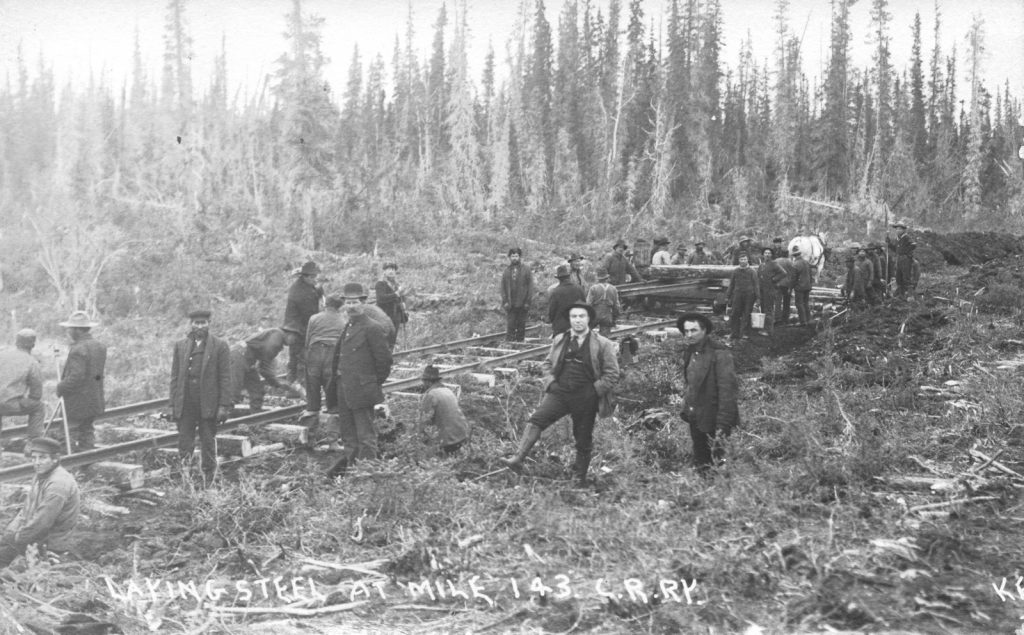