While not feeling the greatest this weekend, I resigned myself to the basement and building benchwork.  As a result, the gridwork is now in place for Cordova-Eyak on the bottom level and McCarthy-Gilahina-Chokosna on the upper level.

Included in the upper level is the first major piece of depressed grid that will accomodate one of the four big bridges I plan to model  – the Gilahina Trestle.  (Photo linked from Don Bains’ Virtual Guidebooks site.)  The other three big bridges being the Miles Glacier / Million Dollar Bridge, the third Copper River crossing, and the Kuskulana Bridge.)  The current version is actually the second trestle – the original burned in 1916 and was replaced by the one we have today.  The structure is ~880 feet long and ~90 feet high on a ~15 degree curve (radius ~440ft.), with six piles per bent and extensive cross-bracing.  Today, it survives alongside the McCarthy Road in a deteriorated state.

For my proto-freelanced version of the CRNW, though, there’s simply no plausible way the trestle would have survived in service to present day.  A 100 year old high wooden trestle is just not up to the passage of heavy ore trains and 200-ton locomotives multiple times per day, no matter how well built or well maintained it may be.  Plus, the trestle forms most of a very sharp curve – much sharper than any reasonable mainline standard.  However, it’s such a stunning visual element along the line, and one that many people who have visited the area are familiar with, so I also can’t leave it out.  My solution is that the mainline will pass by in the foreground, atop a modern deck girder bridge constructed as part of a 1960s-70s era line change (exact date in alternate history to be determined), while the old abandoned trestle remains in the background.  Like many things in the wilderness of the far north, the old is often left just because it’s not economical to tear it down.  Plus, in this case its historical significance to the area in addition to its site within the the Wrangell-St. Elias National Preserve would lend to its preservation.

I’ve had to scale the Gilahina Trestle just a bit.  While 880′ in length, it’s only about 650′ on a straight line between the ends due to the sharp curvature.  (Distances estimated from aerial photographs.)  At full size, it would be approximately 4′ long and 6.75″ high in N scale.  I plan to keep it full height – hence the drop section to give me an extra 3.25″ to play with, but compress the length to about 3′, or 480′ in full size.

If anybody has measurements or plans for the Gilahina Trestle, I’d greatly appreciate hearing from you.  Otherwise I’ll have to head back north and spend some quality time with just me, the trestle, a tape measure, and an ultrasonic range finder.

Here’s a couple shots of the new benchwork grid, including the drop section for accomo 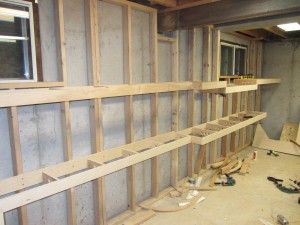 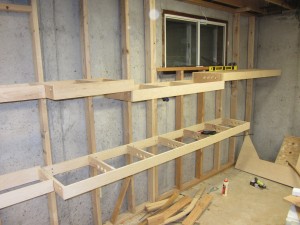 In addition, the Fast Tracks jig finally arrived, and I’ve been practicing at building turnouts.  So far, I’ve built two – one right and one left – and I don’t think I’ve quite gotten the hang of it yet.  Both are usable, but not quite as perfect as I’d like – particularly in the area of getting the point rails just right and making the throwbar move flawlessly.  (I seem to always get the point rails stuck on the stock rail when soldering them, and can never get it deburred once I separate them.)  Also, the FT#7 is a bit bigger than the Atlas #7, leading me to believe the Atlas #7 is really more of a #5-#6.  I’ve put my second attempt next to an Atlas unit so you can do a size comparison. 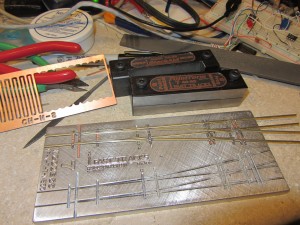 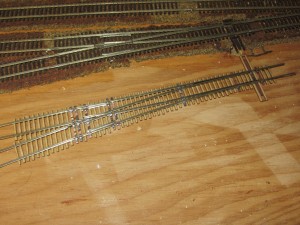 Before I left for home to be with family for Christmas, I had another point rail on an Atlas Code 55 turnout break.  The stamping process appears to leave a weak spot right where the point rail connects to the throwbar, and some of them tend to break.  This is the third of this type of failure I’ve seen, and this makes me suspicious that it may be a common problem.  Combined with my frustration at the complete lack of Atlas C55 availability, I’ve decided it’s time to make some changes.

A few hours before leaving for Iowa, I bit the bullet and ordered a #7 Fast Tracks turnout building kit and associated hardware.  I’ve heard nothing but good things about these guys and decided it was time to give it a shot.  It’s a little pricey to get started, but once I have the jigs and tools, I’ll never be beholden to any company not having track piece X in stock again.  Plus, I’ll be switching to Micro Engineering C55 flex track.  Visually it’s on par, if not a touch better, than the Atlas flex track I already have and the rail will then be identical to my new turnouts.  I don’t like the more rigid design, but it’s made in the good ol’ USA and – surprise – you can actually get it.

The kit should be waiting in the mail when I get home, but I’m still missing a few things like the files that won’t show up until tomorrow.  Hopefully by the end of the week I can actually try out building a turnout and I’ll post again with my thoughts and results.