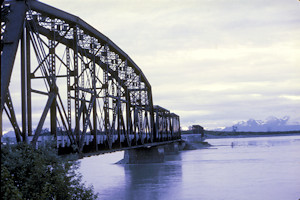 The Flag Point Bridge at milepost 27.1 is the first crossing of the Copper River as the railway leaves Cordova north/eastbound.

The bridge consists of (west to east) a 300 ft. pin-connected Baltimore truss with an arched upper chord and two riveted 150 ft. Pratt trusses, a timber trestle section across a shallow sandbar section of the channel, and four 175ft. pin-connected Pratt trusses (sometimes incorrectly identified as Baltimores), and another trestle across the shallows to a small island.  The steel spans were built by the American Bridge Company, shipped north, and erected by CR&NW construction crews.

A temporary trestle was constructed some 27 ft. downstream of the final structure to allow construction to proceed north while the final bridges were built.   Work on this trestle started upon ice breakup on May 28, 1908, and was completed on July 4, 1908.

Final bridge construction commenced on July 1, 1908, with the arrival of C.M. McDonald, who served as general foreman.  Work proceeded until river freezeup on Oct 17, 1908, and continued the following year on April 1.   Two of the 175ft spans were erected on falsework over the ice, as their piers had been completed before freezeup.  When the ice went out on May 28, 1909, work on the remaining piers and spans commenced, and the bridge was completed on August 10, 1909.  Total estimated cost was $579,643.

On account of river ice being 4-8ft thick at this point, the piers were armored with old 56 ft. rails.

The steel bridges were converted to highway use in 1956-1957, and the timber trestle sections were replaced with piles made of three welded rails, concrete caps, and steel stringers.  It served as a link in the growing Copper River Highway until the Good Friday Earthquake of 1964.

The earthquake damage to the bridge was rated as “severe”.  The eastern approach subsided 3ft.  The shaking displaced the 300ft span 22 inches to the east and 8 inches downstream.  The 150ft trusses moved east and downstream as well, though different amounts.  The 175ft. trusses moved west.  Many of the rail-pile bents broke or bent, and the anchor bolts into concrete piers largely broke.  The western-most third of the center trestle – adjacent to the 150ft. spans – collapsed into the river.  Damage was rated as “severe”.

The entire structure was eventually demolished and replaced with modern bridges for the stub of the Copper River Highway that was rebuilt.

The Flag Point crossing was not part of the Copper River Railroad alignment.  The original CRR alignment stuck to the west bank of the Copper River from the west side of the Flag Point bridge 18 miles north to a crossing a quarter mile downstream of Childs Glacier.  This route was anticipated to need heavy earthwork and snowsheds along most of the route on account of rock slide and avalanche danger.

Note: The nearby Round Island Channel Bridge at milepost 27.9 is sometimes considered part of the Flag Point Bridge in some accounts.  For the purposes of this website, I consider it to be a separate and distinct structure.