While this site is largely about my fictionalized present day CR&NW in N scale, make no mistake – I have a great interest in the history of the real thing as well.  It’s just one of those railroads that really captures the imagination.  Because the line existed in such remote country, was essentially a company railroad, and existed for such a short time, I’ve never found many relics of the real thing.   In the last few weeks, however, I’ve managed to pick up some of that operating paper.

So, how many of you have ever seen an authentic CR&NW train order?  Well, here you go…  This one was written to engine 20 on October 28, 1915, allowing it to work between Chitina and Kennecott from 0530h to 1900h.  It’s absolutely amazing to me that a flimsy piece of train order paper from almost 100 years ago has survived to this day in spectacular condition. 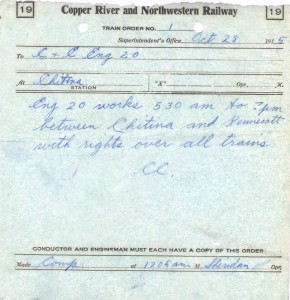 I’ve got a few more things from these finds as well – blank train order forms, agent’s ticket stubs, and a couple clearance forms.  Truly amazing stuff.  I’ll post the rest in the near future.